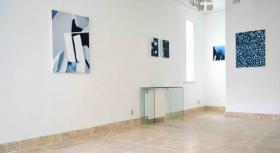 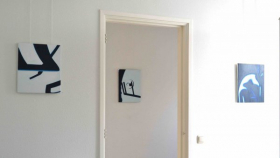 Future Memory is based on  a single image: a nuclear reactor container from 1950 in the USA. Dividing this image into smaller parts reflects the process of nuclear fission, a heavy unstable atomic nucleus, divides or splits into two or more lighter nuclei. This releases radioactive radiation that can have a lethal effect on organisms. The radiation causes an increased risk of cancer or abnormalities in the offspring for decades after exposure. The project is an illustration of the way in which traumas of nuclear and other wars in the post-war era are still felt all over the world.

Painting splits up and lives in parts

Because the painting splits up and lives in parts, the work itself functions in a similar way. The smaller works, each a painted detail of the total image, have been separated from the large painting and exist independently of this total image, and independently of each other. Another set of paintings is created by using the residue of cut outs to reflect on the after-effect of the radioactivity. Like the nuclear fission, their information spreads like energy, unrecognizable as a separate part, but with the story of their origin as a reminder for those who choose to tell the story. The cold war specifically, but other wars as well, are about information supply. What is not being told or communicated, remains hidden in the moment. It is neither true when it happens nor later, when it can never be exactly reconstructed. Information is distorted in this way, and the question arises how reliable it still is. A tension arises between the factual information of the cropped photograph and the information that is transmitted via memory and stories, where neither the factual information nor the memory leads to a reliable image.

The aim of Future Memory is to question the value of the image as a source of information, within the field of painting.
How far can you take this specific piece of information to transform it conceptually and formally to resemble the information streams of the cold war? Analyzing the image it will dissect it even further, first cutting it into fragments, then collaging these fragments into new images, then using the cut-outs that are the leftovers of the collage process into yet another series of images. “The paintings that I make will be cut up and reused, so that the information on them (that was referring to itself to begin with) gets distorted further and further. How far could I (we) go, diverting from the original source of information?”