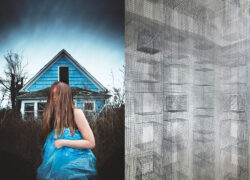 Exhibition: May 8 to June 5

For the series Liminal Zones by Maureen Bachaus, after which this exhibition is named, the artist asks questions such as: How does man relate to his changing environment? Is it a product that can be packed, sent away or shipped to achieve an economic or political goal? Do people seek protection by creating their own, safe world? Or do they take on a director’s role in order to control and shape the changing outside world? In view of the recent developments in Ukraine, the questions have been given an extra weight. Bachaus’ artistic search led to a number of symbolic portraits, including of the autistic teenager Gwen. Gwen chooses to live in ‘Zones’: each with its own theme, story and environment. She determines every day in which Zone she wants to live and thus also determines from which perspective she views the world that day. This approach applies to all those portrayed in the series ‘Liminal zones’. During her travels at home and abroad, Maureen captures special locations and situations. These images tell a personal story related to changing external circumstances. These are presented in the series ‘Wonderland’.

In addition to striving to make her work visually blend in with its environment, Waeyen uses her work to explore whether she can break down the boundary between the viewer and the work of art. A (red) line on the floor of a museum regularly marks the appropriate distance of the viewer from the work. Where are the boundaries of her work? Where does it start and where does it end? She makes connections and lets people participate. For example with the transparent and accessible ‘little museum’, which looks like a spatial, fine-mesh interplay of lines. Little museum was created during the pandemic. Waeyen made her own pop-up museum, in which small removable drawings are presented. It can be placed anywhere and is present and accessible in the exhibition. Due to the transparency, the inner and outer world are inseparable and people can see, hear and smell each other. The spectator becomes part of the situation through Waeyen’s intervention, regardless of whether one is outside or inside the work.

The term liminal marks a transition phase, a threshold to inside and outside, a threshold between consciousness and subconscious, a transition between 2 roles, 2 zones, 2 environments, for example between the environment we control ourselves and an established or imposed situation determined by othes. They are boundaries between physical locations, but also between people and powers. Boundaries to break!