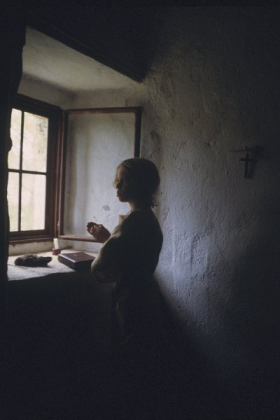 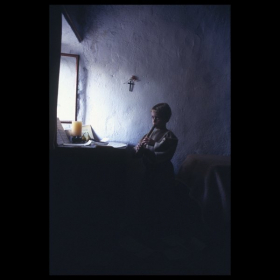 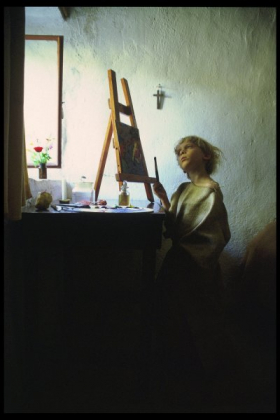 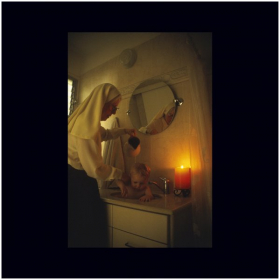 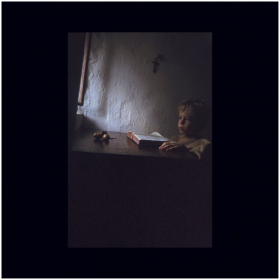 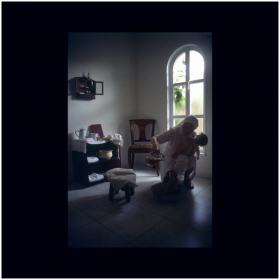 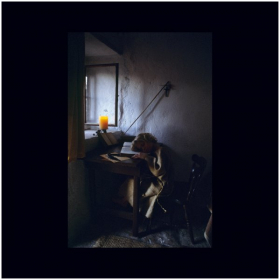 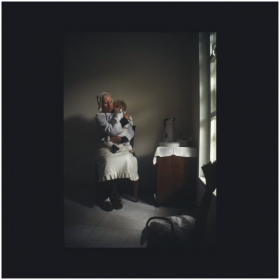 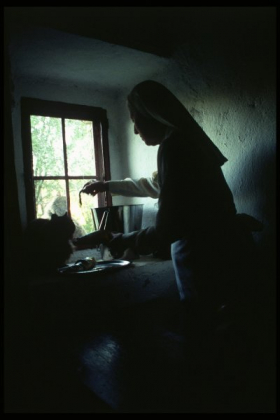 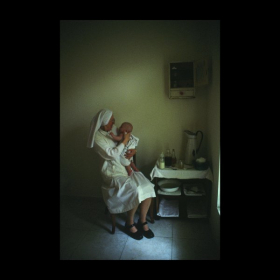 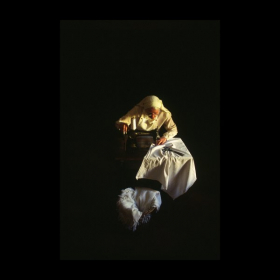 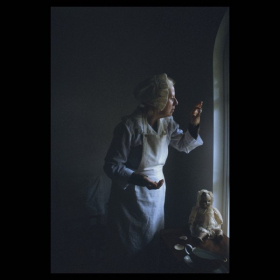 Dovrat Amsily-Barak is a young woman who has read and thought a lot, and looked at art, including the Dutch masters, who have influenced her. She makes staged photographs. Unlike capturing the decisive moment, as Henri Cartier Bresson has called that creative moment in art photography, in staged photography the artist constructs that moment. For the idea she has in mind and wishes to materialize she searches for a place, attributes, and people and makes photographs of that scene, making an artifact out of a human situation. You can see that the persons photographed trust the photographer. The session seems more a duet than a duel. The scene is aesthetic as well as theatrical, no distracting background details, but objects that add to the message the artist gives. The extra layer created by restricting herself to a partly given situation adds to the image, our imagination and creates insight for the onlooker, looking to the artwork becomes an activity, a discovery of the significance of that human scene.

Photography for Dovrat Amsily-Barak is a tool to explore the world, to record not just these individuals in this time, but something universal, making the creative act a recognition of content, of function, not its construction, its form.  Each work asks you to look further, to look for details that you so far not noticed. Her work is not about the individuals photographed it is about us. No photo-shopping involved. The technique of staged photographs originated around 1990, especially with the Canadian artist Jeff Walls. Some people say: it is the lingua franca of contemporary art, making clear that every sort of representation includes manipulation. Those staged tableaus are not just snaps, nor real or photo-shopped collages, no reports. These are stills, stilled moments in time, frozen with a camera shutter.

There are good indications that also Johannes Vermeer used a sort of camera, a lens in a box, a camera obsura. This optical transcription of mechanical nature could be an explanation for the calmness seen in his delightful and “enlightened” paintings. Amsily-Barak’s work has an almost painted picture quality. She pushes her view of our world in our faces, while making contact with the past and producing something at the same time graceful, tender, majestic. The present mystified and clarified by the past in icons of everyday life. The pictures sit on wide black margins, which draw us into the scene in which we participate

Amsily Barak had exhibitions before in Israel, the United States, and presently in Greece. She will be present during the opening of “Family Hallucination” in Art Gallery O-68, together with het mother and children who often are models for her work.